Beech Lodge Care Facility opened its doors in 2002, as a 40-bed nursing home. This was the first nursing home in Bruree and owners Anne Maria and James Moore welcomed residents from the local area, as well as Kilmallock, Charleville, Kilfinane and beyond.

2009 was a busy year for Beech Lodge, with the opening of the extension which including a secure unit and the 12-house retirement village adjacent to the nursing home. The unit was opened as an Acquired Brain Injury unit, one of the only such facilities in the mid-west.

2012 sees Beech Lodge mark it's 10th year in business. Due to high demand for a secure facility for individuals with Dementia/Alzheimer's in the area, the secure unit's purpose was changed to cater for Dementia and Associated Illnesses.

On 22 July 2012, Anne Maria and James threw a party to celebrate the last decade. Residents, their families and friends joined Beech Lodge team to mark the milestone. Here is to the next 10 years, and beyond!! 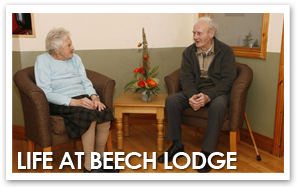